What follows is a remarkable story. Not just in terms of content, what happens, but perhaps moreso because it has survived. It is a tale of deception, bureaucracy and the hardships of past times, which has reached us in a small bundle of legal papers. This survival is thanks to one man – Colne local historian Wilfred Spencer, who saved the bundle along with thousands of other bits and pieces of the town’s history.

It hard to know where to begin with it really, so we’ll start in a pub, the Bluebell on the outskirts of Colne. It’s as good a place as any.

The Bluebell is now a row of cottages and where perhaps there is a TV, cooker or sofa, one day in March, back in 1787, Philiss Barret met John Robinson. She, like him, was heading into town. Where Philiss had come from we don’t know, but John had just rolled in from over the hills to the east, in search of work. He was a shoemaker and carried the tools of his trade.

We don’t know what was said either, but for John and Philiss this was the start of something. One thing led to another and on 4 March 1788 the two were married in Skipton parish church.

That initial meeting was not just the start of Phillis and John’s relationship, but very much a second start for John, perhaps to him a fresh one. A new leaf.

John had been baptised on 6 January 1760, the son of Jeremiah and Hannah Drake, at Pudsey chapel in the county of York.  John and Philiss’s big day in Skipton was not the first time John had tied the knot: that had been on 27 September 1779 when, as John Drake, he had married Esther Riley of Bramley at Leeds.

John was no stranger to fatherhood either. He and Esther had had 6 children, 2 of whom had died. Esther though was still very much alive.

You see, John had been John Drake, husband to Esther and father of four until a day or so before he turned up at the Bluebell and introduced himself to Phillis as a Robinson, a name he didn’t quite pluck from nowhere: Robinson was his mother’s maiden name.

Drops of the truth leaked out at points over the next 30 years, but it was not until just after John’s death in 1826 that a thorough and expensive investigation was launched and the whole matter, as well as lots of the people involved, ended up before a judge. That’s when it all came out.

The road to the courts was a long one. Even when John met Phillis, just before Colne Fair, back in 1787, he was already a wanted man. 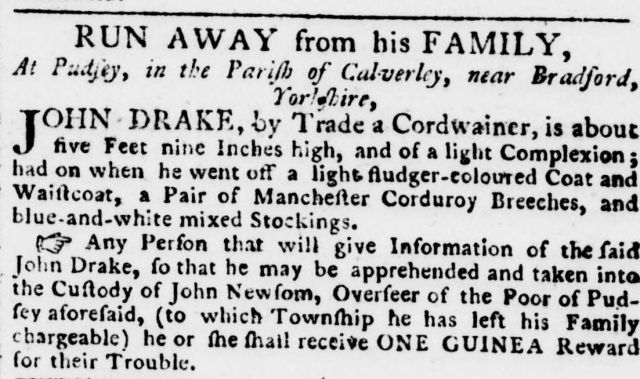 Coming soon: how the truth came out……..

Notes: The papers are part of the Wilfred Spencer collection at Lancashire Archives (reference DDSP)

This entry was posted in life, poverty, work and tagged poverty, trade. Bookmark the permalink.